A tech startup that empowers OFWs

As a generous effort to better their lives and those of their loved ones, there are currently millions of OFWs (Overseas Filipino Workers) who make it a point to allot a portion of their earnings to their families living in the Philippines. Naturally, they go through the remittance process, usually once a month or during pay day weekends. Unfortunately, overseas money transfers have also become prone to problems such as money falling prey to the hands of fraudulent people, or funds being misused by another family member. As a result, the hard-earned money of Filipino Workers never gets used for its intended purpose. After going through this experience and coming to terms with how important it is for OFWs to have more control of their money, Mariliese Tan sought to it to come up with a better system for Filipinos to provide for their families in the Philippines. Teamed up with competent acquaintances—Albert Christian Go and Jonathan E. Chua—she managed to form BeamAndGo—a digital marketplace and online alternative remittance catered to OFWs all over the world.

The goal of BeamAndGo is to support the families of OFWs through other means of supply besides cash, namely: to enable them to obtain food, medicine, healthcare, insurance, and the like in a way that is convenient and reliable. Going to the website—BeamAndGo.com—an OFW can sign-up to purchase digital gift certificates to be used for supermarkets and other partner merchants of the company. These digital gift certificates will be sent to the mobile phone of the OFW’s intended recipient within 24 hours and upon receipt, the recipient can directly redeem goods at chosen stores. Directly paying for insurance, healthcare, and bills is also an available option through online secured payments. Thus, BeamAndGo proves itself to be a relatively easy and trustworthy process as compared to sending money without knowing how it will get spent. In this way, OFWs will have more freedom to choose the basic need/s of their family that they wish to fulfill and can enjoy the convenience of purchasing them online. So far, BeamAndGo has already gained traction with OFWs worldwide, securing itself with almost a hundred thousand sign-ups. Once BeamAndGo becomes established in the Philippines, it will aim to expand internationally in the different Southeast Asian countries. 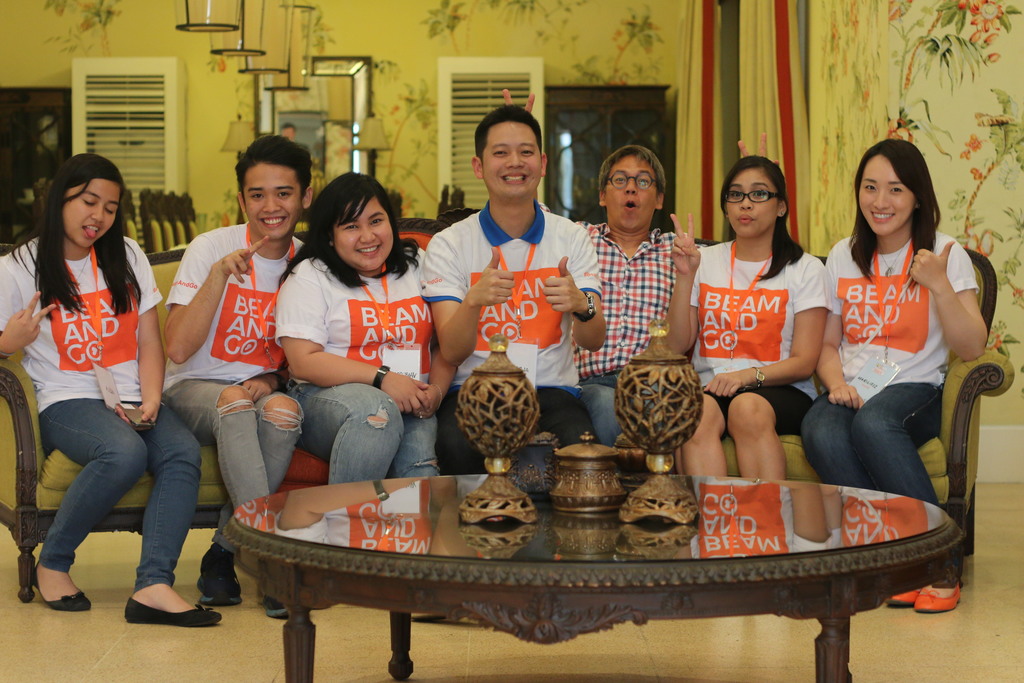 Mariliese came up with the idea for BeamAndGo back in the early year of 2013. She was looking at the common issues of OFWs regarding remittances. She contacted an acquaintance named Jonathan E. Chua, a software developer who had extensive experience with helping other businesses get on their feet. Mariliese also ended up contacting another acquaintance, Albert Christian Go, an OFW from Singapore with years of experience in marketing. The entire BeamAndGo organization is also comprised of employees who either had prior OFW experience or has an OFW relative. Having this connection with OFWs makes it easier for them to fully understand the pain of not being able to regularly see family members, along with the mismanagement of money. As a result, they are able to come up with ways to address these through the reliable service they provide.

With a previous background in the corporate life, Mariliese thinks of her current entrepreneurial life as something that is more fulfilling—where there is more to look forward to under her own control. She senses the passion in this, as it extends itself to even after work hours. Right now, with BeamAndGo, she knows that she is addressing a big problem for OFWs, and is thus making an impact on other people’s lives. ‘’If I were to do something big for my life, it has to have a good effect on others’’, Mariliese voiced out. Making a change in the industry to make people happy is really the vision that gets her going. To her, a startup that qualifies as a need is a startup that is guaranteed success. When one has a mission to achieve, with a strong team and a good product behind them, everything will just naturally fall into place. In her team, there is a sense of quiet confidence in which everybody trusts in each other’s abilities. The passion to serve and help fellow Filipinos who work hard to provide a better future for their families’ is also the main driving force that keeps the BeamAndGo team rolling. Not a single member of the team will tell you that this is “just 9am-5pm job”. The ability to help others is in itself, a rewarding experience for everyone.

Penetrating an industry that relies heavily on direct money remittances can be a daunting task for BeamAndGo, especially as a startup. In addition, it is never a walk in the park to introduce something new to a market that has dealt with their money the same way they have done so for years. Mariliese believes that building a startup will always involve risks and with BeamAndGo, she took them head on, driven by the need to introduce change.

Compared to the previous generation, the current one seems to be a lot more enthusiastic in venturing into risks, and she believes that it is mostly due to the encouragement and spreading of ideas through various internet platforms. Mariliese says that had she been more educated about how startups worked, she would have begun her idea earlier. Perhaps a nice addition to the current educational curriculum would be the inclusion of more entrepreneurship courses. Like-minded young individuals can already be encouraged to use their creative ingenuity to take risks and provide better solutions to everyday problems the world face. Who knows? Maybe the next bold risk-taker is already in the making, waiting to shine the world with his or her bright, new idea.